The Weygang pewter foundry is a prime example for a firm, whose production has continued to the present day, using original antique moulds and reproducing pewter in the historical style. On the one hand we have the accurate recasting of old models and on the other this range is complimented by the addition of new creations, themselves inspired by the traditional forms.

From about 1885 on wards August Weygang (1859-1946), a member of a long established family of pewter founders, set about building up this extensive stock of models in Ohringen (Hohenlohe, Wurtemberg): by purchasing older moulds from other workshops, by collecting antique pewter ( now exhibited in the Weygang Museum, Ohringen, along with a collection of faience) and by the production of facsimiles modelled after pewter in museums and private collections. Thus the range of Weygang pewter encompasses important examples, virtually a conspectus, of the manufacture of pewter from the 15th century to the beginning of the
19th century. 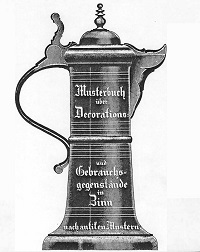