THE habit of drinking tea has a history of nearly three centuries in England, dating from its beginnings in Charles II's reign. It remained a precious and expensive luxury until the reign of George I, but in 1715 we are told that tea drinking had become generally customary among "well-regulated families." Though the cost of tea dropped during the course of the century, it still remained a  luxury, and tea was kept in caddies under lock and key. A writer in 1753 records that in the country, people used tea, but they seldom opened the tea chest but to the best company and that less than a pound lasted them for a twelvemonth. 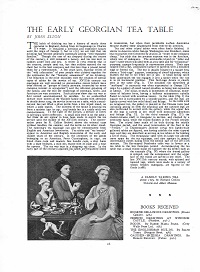