Christened in 1702 at Bowes, Yorkshire, his father was Christopher, a Husbandman which in the medieval and early modern period was a free tenant farmer. Mother Mary Wharton. George was one of three children when his father Christopher died in 1708. His mother Mary’s second marriage was also to an Alderson and there were 6 more children. His apprenticeship document to Richard Heslop, Pewterer in 1721, records him as “from Shellum”. [The only likely location is Shellum’s Wood near Azerley, Kirkby Malzeard, Yorkshire]. Being 19 at the time, George could have been working on the local estate. 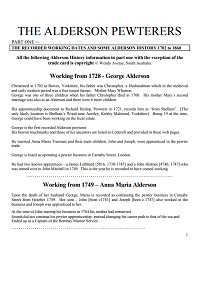