This section is included to show the design styles that competed with old Pewter in the period. We should remember that Old Pewter when New looked like silver. A decorated plate was really made to hang on a wall or stand on a shelf. It was art work for the home.

Although some fake plates were later made you could not take an existing ceramic plate and change it or add to it as was possible with Pewter. Thus, these designs on ceramic plates show us how the culture of the age was expressed. Also, the style at that time of that expression.

Suggest you take note of –
How rims or borders might be simple or cross hatched, not all - just most.
How the central design is usually very large and often fills the space available with a large design.
That the WRITING is generally big and bold. It is often easy to read at a distance.
(It might be interesting to look at size of script/font used at different ages – it is suggested that it became smaller as the years went by. That what was being used in late Georgian times was considerably small than in the times of Charles/William). 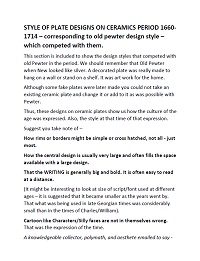