This section intends to show in one document all the pieces of old pewter that this researcher has found photos of; those which show a pictorial representation of a Monarch. This then repeats pieces shown elsewhere.
Towards the end of this section is some commentary not seen elsewhere. Thus far – Charles 1, Charles II, James II, William and Mary, William, Anne. It appears that in the 1920s and 1930s a larger number than was known of before was ‘discovered’ ‘found’ or acquired by collecting members. Some members of the Society of Pewter Collectors were deeply unhappy about this development. It is not as though the collectors before 1920 were not enthusiastic in their searches. 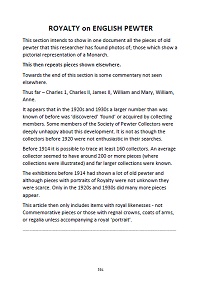