‘Vetter was an Austrian engineer who lived and worked for a long time in Amsterdam. He was an employee of a firm which from c. 1926 experienced some difficulties, culminating in severe losses early on during the depression [which followed the 1929 crash - HBvW]. His devotion to pewter research and to Cotterell must have slowed down his career prospects and possibly also ruined his marriage ... He returned to his native Austria where he assisted the famous Austrian collector Karl Ruhmann in planning and administering ‘the Dr Karl Ruhmann Trust’ on permanent display in Wildon, south of Graz. (Ruhmann purchased the bulk of the Vetter collection.)’ (Report 1999, Folder 4.II).ii 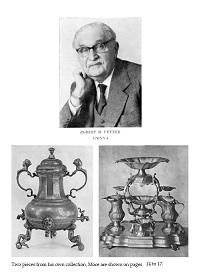