THE dishes and chargers which form the subject of these notes cover the period 1600-1680; they are embellished with bosses of copper (or brass) and enamel, bearing Royal Arms and set in circular frames of  pewter.
raised from the centre All are either of English or Scottish make, and in describing them I have used the term 'rose water dish' by which they arc generally known to collectors; it is, however, very improbable that the later examples were used as such. 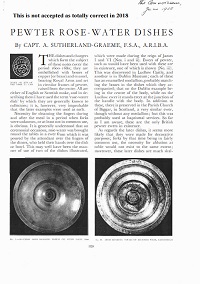