Narrow-rimmed Wriggleworked plate by Lawrence Anderton of Wigan. c 1680
Copy by courtesy of - David Moulson BSc
This lovely plate is 8 and eleven sixteenths inches in diameter with a rim width of half an inch. It is unusually shallow being only a quarter of an inch deep. There was a similar example by the same maker sold from the collection of Ronald Michaelis, Sotheby’s 12th November 1973, lot no 38 and there is a superb flat-lidded tankard by Anderton in the collection of Colonial Williamsburg, number 238 in their catalogue. Pieces by this maker are very scarce.

There are two clear touchmarks struck on the back of the plate of the initials ‘LA’ either side of a fleur-de-lys within a heart. Most heart-shaped touchmarks were used either by West-country or Wigan pewterers and LA was thought to be from the South-west but is now recognised as being from Wigan (see the Pewter Society Database ID no 320). He appears in the records a number of times: - he contributed towards a gift for Charles II in 1661, was Warden of the Wigan Company of Pewterers in 1666, was Master of that Company in 1673 and 1684 and was Mayor of Wigan in 1685. Stylistically this plate probably dates towards the end of his career in the 1680’s.

The plate is beautifully decorated with three wriggle-worked tulips within a border and there is a Greek key motif around the rim. Condition and colour are good.

(This website additional comment -This plate appears unused and the evidence of three mark at quarter hour intervals around the rim suggest that it was made for or used as a wall hanging for a long time.) 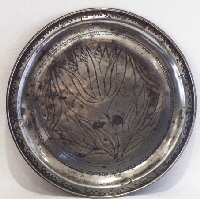 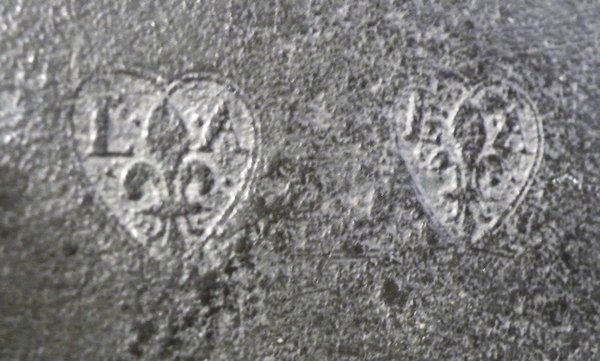