In 1356 an earthquake near Basel in Switzerland destroyed half of the city. It started in the late afternoon of Saint Lucas' Day, October the 18th. Around 4 o'clock p.m. The first shock was noted, immediately resulting
in the collapse of many houses and of the choir of the Munsterchurch. Many inhabitants fled from the city and in the evening several shocks followed. Moreover a vast part of the city set fire. The fire went on for eight days. Almost all churches in the surroundings 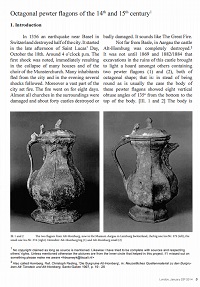