This essay is an attempt to reconstruct a little of the history of the Moroccan merchant community in Manchester, and to establish both who Wright actually was, and how his collaboration with those expatriate Fassi cotton-traders gave birth to – or perhaps simply perpetuated – the Moroccan théière. It will then trace, insofar as is possible, the evolution of the reputation and manufacture of ‘Wright’ silver plate down to our own day. Finally, It will look briefly at the mythology that has grown up around Richard Wright in Morocco, inhabiting as he does the odd paradox described by Abdelahad Sebti: 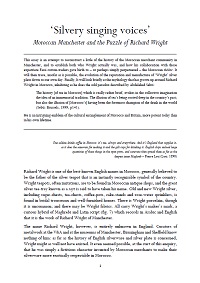