AMERICAN MEASURES - Especially As Regards Wet Volume And Fluid Ounces - As Compared With British Measures – There Is A Difference. Most American weights and measures are the same as those in the UK, but there are a few notable exceptions. The one that most people know is the gallon, which means that other liquid measures (pint, fluid ounce etc) are also different. But the ton and the hundredweight are also different, as are the dry measures, such as the bushel.

BULBOUS MEASURES - Types commonly found and a guide to dating them from a talk given by R F Michaelis at Peterborough in March 1966 No real research has formerly been done on this well-known type of English pewter measure, but as it appears that there is now a danger of specimens of some of them fast disappearing overseas.

CROWNED HR - Collectors and others have noted the presence of these marks struck on the lips of some baluster measures since the early years of pewter collecting. However, despite several attempts to explain them, no one to date has been able to rationalise the varieties of this type of mark and the apparently inconsistent capacities of the measures on which they appear. Attracted by this problem some years ago I set about gathering data on measures marked in this way.
John Grave of Penrith Hammer Heads
Conical Measure - Lot 40 PS Auction of Spring 2021
Measure for Measure by Carl Ricketts
Crowned hR/HR Verification
American Measures
The Capacity Of British Liquid Measures
Bulbous Measures And Guide To Dating Them

These came from the collection of Jack Kolaian of New York, and each has his mark and numbered collection label under the base. They are in identical condition, although not a matching set.

The numbered labels show they must have taken many years to acquire, as they range from 40 to 552, with the half-gill (#344) and the half-gallon (#552) being the hardest to find, as is still the case today. Only the half-pint has a maker’s mark – Randall Moring of London.

Three have American verification marks, the half-gallon ‘CM’ probably standing for Commonwealth of Massachusetts. The quart has several variants of ‘CS’ and ‘CC’ (County of S etc?) on lid and upper handle, and the gill ‘B’ (Boston?), about which marks nothing more is known. The gallon has the earlier form of handle with a shield terminal turned back upon it as found on bud gallons. None are repaired, and all are in similar slightly used condition, with the half-gallon being the best. 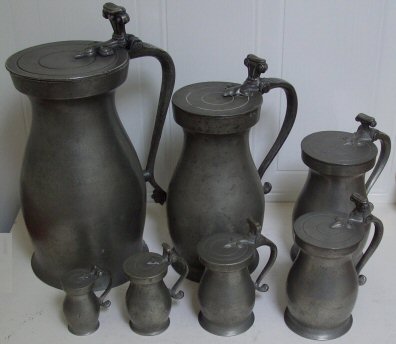