GERARDIN and WATSON London Pewterers 1805 to 1854 The marks identifying mugs and measures produced by Francis Gerardin alone or later in partnership with a Mr Watson (of as yet unknown first name), are quite often found. Although very little is known about them their pewter mugs survive from the first half of the 19th century (1805-1854). Such survival implies a good quality of Pewterware as they worked within the centre of much Pewter making activity around Poland Street and Oxford Street in London. 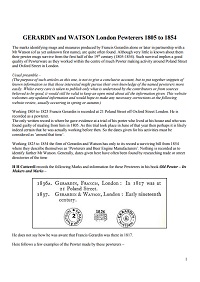