Marks Found Under Base of Pewter Mugs & Measures

This is a precis of a talk given by Geoff Lock of Adelaide Australia to a meeting of the British Pewter Society in Spring 2008
Used as a reference book is ‘’Marks and markings of Weights and Measures of The British Isles’’ by Carl Ricketts with John Douglas. Page numbers quoted are from this book.

The question asked is –

How many different examples of verification marks exist that were struck centrally underneath the base of mugs and measures and why was striking the mark under the base chosen by some Inspectors?

BODY STYLES SEEN WITH MARKS UNDER THE BASE –

Only truncated cones and bellied measures have been found with these marks under the base.
Other styles may have been so stamped but they have not been seen or recorded.

CAPACITY OF PIECES WITH VERIFICATION MARKS UNDER THE BASE

MAKERS MARKS FOUND ON THESE PIECES

LOCATIONS IDENTIFIED BY THE MARKS & DESCRIPTIONS OF THEM

Crown over WR as shown on page 182 measuring 8mmwide by 9mm down. Seen struck in the middle under the base of OEWS ½ gill bellied measure. No other marks c1820.

Crown over GR:IV over OM as shown on page 167, and without the year date this measures 8mm x 10mm. Found struck under the base of a ½ gill bellied measure where the base has been bumped up (to serve less?) – this also had WR on the rim inverted. Might be of Birmingham make as the mark for Birmingham Town c1790-1825 shown on page 184

Imperial Standard gill bellied measure by B&W likely Bolton and Wylde of Wigan has Crown over GRIV over JD over 1831 (as shown on page 168) measuring 8mmx12mm.

Also a smaller crown over WR over SR measuring 5 mmx7mm. c1830s and has GILL struck on body in individual letters

Cross Keys of St Peter mark, flanked by two small crosses within a shield (page 190).Mark measures 7mmx8mm. Struck both on the thumb rest of the handle and under the base in the centre on an imperial standard gill bellied measure - made by Yates & Birch type 2a c1840.

A small curved mark under the base of a front spouted truncated cone measure pint by I C Crane of Bewdley. As for Flint Co (see page139) but small lettering being under 2mmx8mm. Also marked on the body for Salop and Denbigh.

(illustrated on page 233) J Thurman was an inspector for Weymouth c18325 – a combined J & F mark. A circle halved is struck in the centre being 7mm diameter. Both the Crown and Thurman’s mark are 7mm x 7mm as is the Dorset (E D ) mark.

An unrecorded mark of William Nunn of Hertford who used a W N between a crowned shield containing H (page 197). Easy to confuse with WR. Nunn may have used NUNN, Hertford to avoid any legal difficulty.

Measuring 2mmx11mm for Nunn and 2mm x 19mm for Hertford found struck one above the other under the base of a truncated Imperial Pint Mug. Also separate marks of two concentric circ les 4mm and 8mm diameter struck in the centre under the base. The body has 1 over H as well as post 1878 mark for Hertford - VR 396

IMP GILL overstruck by a large ‘2’ together with Co.FOR and a rubbed large Imperial Crown. Faint stamped initials of DH. The Imp Gill mark measures 3mmx15mm and the figure ‘2’ is 4mmx8mm. O.FOR is approx 21mmx4mm. Marks are struck under the base of an Imperial ½ pint truncated cone by Kiniburgh c 1820s Edinburgh.

Arial font ‘SM’ on thumb rest and under the base of a ½ gill Imperial bellied measure. Measures 7mmx5mm. Only one such seen as if ever found is usually accompanied by a crowned VR mark signifying Standard Measure, Victoria Regina

WHY WERE MARKS STRUCK UNDER THE BASE?..... and other questions……

Some inspectors acted independently as to where they placed their marks, certainly up to 1840. (Anomalous Jurisdictions that were literally laws unto themselves).

Local Manorial marks of Sir Oswald Moseley and J Dearden have year dates including 1826/30/31. These indicate pieces were inspected in that year as conforming to the Imperial Standard of G IV in 1826.

Police officers began to act as Standards Inspectors from 1840 and that would bring uniformity.

To stamp such as NUNN over HERTFORD needed good size of flat surface especially on ½ gill and gill capacity measures. Curved body parts are suited to small marks. Consider the marks of J Dearden (8mmx12mm) Nunn’s (2mmx11mmover 2mmx19mm) and Forfar (collectively 21mmx21mm). It is likely the stamps used had a flat not curved face needing to be struck on a flat surface.

Prevention of ‘Wear and Tear’ of Verification Mark?

Marks under the base are elevated by the ‘skirt’ of the measure and less likely to be rubbed away by frequent handling, polishing, or cleaning.

Bottoms of measures are often found bumped up thus lessening the fluid held and failing to give the customer as much as was being paid for. Stamped central under the base would reveal if bumped up after verification. Curiously Geoff has a ½ gill (which measures to OEWS) bellied measure that has a WR mark on the rim Crown over GR: IV over OM has been bumped up in the base yet also verified afterwards for Imperia measure.

When were the Marks in use?

This is supported by –

Geoff Lock concluded by saying that this information has been presented in order to add to the knowledge of collectors about a mark positioning that has no previously detailed published research. The suggestions made are there to be criticized, rebuffed or added to by those who are closer and have far greater access to pewter-ware covered by this topic. Such is ‘’The tyranny of Distance’’

To clarify Geoff thinks we in the UK should find these pieces far more easily than he can and he would welcome any input concerning this subject.

Illustrations of the Marks mentioned 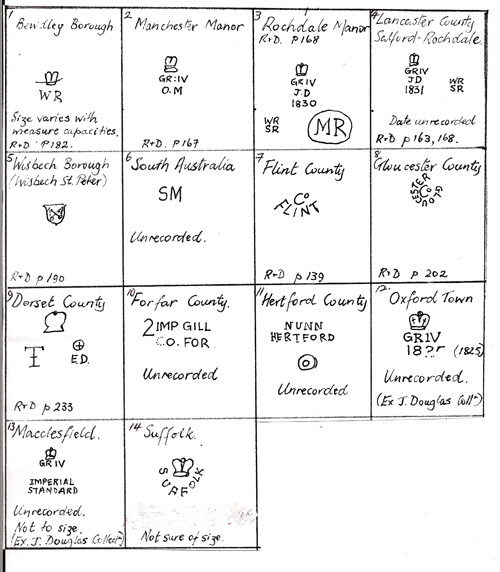 A London made Quart Mug carrying underneath the base the distinctive verification marks for Great Yarmouth struck four times with three showing clearly. 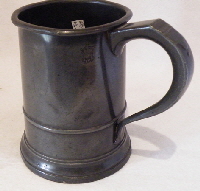 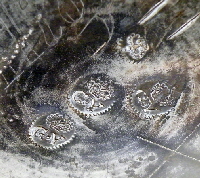