Baluster Measures
On 29.6.1350, a London pewterer John de Hiltone was charged before the Mayor of London and pleaded guilty to making 23 'false potels' not of pewter but lead, which were confiscated and later sold for 19s 8d 24 Edward III 1350. Letter-Book F. fol. clxxxv. We do not know what shape those early measures took, although it is possible they might resemble the globular 'half-pottle' example in the Neish collection (#44-428). This is the earliest known measure except for the one from the Mary Rose, and is of considerable importance. 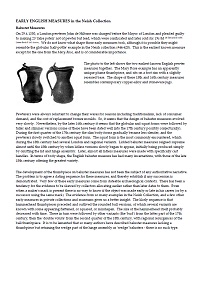